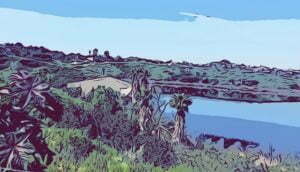 The trails located here are diverse to suit a whole range of hiking abilities. Most do involve steep inclines at some point, the most famous of which is “Big Red,” an incredibly steep hill with an unmistakable red dirt trail leading up. The 5.7-mile looped East Ridge View Trail is a challenging trail that rewards those who make it up with a beautiful view of the canyon and surrounding area and makes for a great hilly mountain bike ride. The easier, 2.5-mile looped Lake View Trail at the northern end provides panoramic views of the reservoir and is popular with runners. The 22-mile long Mountains to Sea Trail, which begins in Weir Canyon and runs all the way to Upper Newport Bay, also passes through Peters Canyon. Other shorter trails are linked throughout the park, and a map for these may be found at the entrance.

While some areas of vegetation are still struggling to regrow after the Canyon II fire last October, many of the trails still offer beautiful greenery. Peters Canyon Creek Nature Trail is beloved for its groves of black willows, cottonwoods, and seasonal creek. The wildlife population is lush throughout the park, and coyotes, raccoons, rabbits, and deer may be seen. Keep an eye out, however, for some of the canyon’s more dangerous residents. Occasional sightings of rattlesnakes and mountain lions have been reported, but no harm has come to visitors.

Due to the types of habitats located in the canyon, shade is very limited on most trails. Be sure to start your hike early in the morning or on an exceptionally cool day, and bring lots of water!

The 55-acre Peters Canyon Reservoir was constructed in 1931 by the Irvine Company. It is located at the northern end of the park and provides a beautiful quiet area for relaxation and birdwatching. It’s estimated that over 100 different species of migratory birds visit the reservoir each year, making it one of the most diverse birdwatching locations in Orange County.

Swimming, fishing, and using watercraft in the reservoir are prohibited. It can dry up during drought periods, but is currently full.

Parking in the lot at the main entrance of the park off Canyon View Avenue is $3. Do not forget to pay for your parking pass at the kiosk when you enter! Otherwise you may find a $45 ticket on your dashboard when you return. Some friendly hikers getting ready to leave may offer you their pass if it still has time left on it, but be aware that pass-sharing is not permitted and may also result in a ticket if caught by a ranger. If you’re looking to avoid paying altogether, you can utilize the residential streets nearby, park at the Peters Canyon Elementary School after school hours, or use the south entrance.

Peters Canyon Regional Park has a more interesting history than most of its neighbors. Like much of the land in the area, it was bought by the Irvine family in the 19th century, who then leased the land to local farmers. One of these men was barley and bean farmer James Peters, after whom the park was named. His lasting impression on the land can be seen in the non-native eucalyptus groves he planted near what is today Lower Peters Canyon Retarding Basin, a dry reservoir that provides flood control to the area.

For the first few decades of the 20th century, Peters Canyon played host to a nine-hole golf course. During World War II, it was transformed into “Camp Commander” by the U.S. Army and saw many mock battles played out in its eucalyptus groves. Finally, in 1992, the Irvine Company donated the 340 acres that the park consists of today to the County of Orange.