If you walk your dog in areas known to be home to coyotes or hawks, you’re probably wary whenever you take them out for a stroll or run. Perhaps you have a smaller dog and sometimes opt to walk them where other, larger dogs can be nearby. Your little guy needs some Coyote Vest body armor. And when they’re wearing it, they’ll look pretty cool, too. 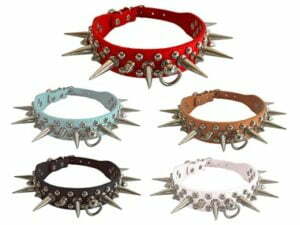 Predator Deterrent Light – Predators like to lurk in the darkness, right? They don’t like bright flashing lights. That’s why these LED flashers protect your dog from all the threats surrounding him. They make sure your dog is highly visible so you know where he is at all times.

SpikeVest for Dogs – This one’s similar to the coyote vest, but it’s constructed with a Kevlar reinforced collar that provides maximum protection for your dog. Even though it looks tough, it’s lightweight and comfortable enough for your dog to wear during their entire walk.

SpikeVest for Cats – Your cat needs protection from coyotes too. The feline spike vest is made especially for cats. It’s lightweight, and the spikes along the neck and back make it virtually impossible for a coyote to make a move on your precious little guy.

Coyote Whiskers – CoyoteWhiskers are optional add-ons to your CoyoteVest. They were made with mother nature in mind – if there was to be a creature designed to stand up to coyotes the most, they’d look like your dog, wearing CoyoteWhiskers. They’re attached to the back of your CoyoteVest, and look similar to the whiskers on a broom. They’re light but hardy, and not only do they protect your pet against attack, they deter the attack from happening at all because of the altered appearance of your animal. The coyote will say, “what’s that?” and think twice before attacking.

Spiked Collars – Spiked collars have always been trendy, but now they can save your dog’s life. It’s easy on, easy off, and adjustable for small to medium dogs. No predator is getting through those spikes.

Throat Guard – When a coyote attacks a dog, most of the time they’re going to go for the neck. Sometimes, if your dog is submissive during the attack from a larger dog or a coyote, they might roll onto their back and even expose their neck. The throat guard makes your dog look like a tough guy. But it also makes him a tough guy. The spikes cover the neck and make him impossible to attack.

Fence Rollers – Did you know a coyote can easily jump a 6 foot wall? A coyote roller is designed to prevent animals from getting the foothold they need to climb over a fence. Keep in mind coyotes can burrow under fences too.

Wall/Fence Spikes – Similar to coyote rollers, wall spikes are also designed to prevent coyotes from climbing a wall to enter a backyard. Wall spikes have the added benefit of guarding against trespassers too by providing a strong visual and physical deterrent. Sharp fence spikes such as barbed and razor wire are not typically allowed by law or HOAs.  Be sure to use anti-climb security spikes that are safe and legal for use on fences, walls, gates, sheds, railings, ledges etc.

Ultrasonic Noise – Ultrasonic sound waves are nearly silent to the human ear, which can make them perfect for use in residential areas. These electronic devices can deter a number of unwanted animals, including coyotes, in open outdoor environments.However, caution must be used if you or neighbors have pets that also may be also be irritated by the noise.

Coyote Vest for Dogs – This vest will increase your dog’s chances for survival if ever attacked by a coyote. How? He’s got an array of spikes around his neck. The spikes make it extremely difficult for a predator to lift your dog and run away with him. Don’t worry – the spikes aren’t heavy, but they do their job. He also gets to sport spikes all along his back.