Villa Park has a long history of fires where the causes have ranged from gusting Santa Ana Winds, to droughts and even arsonists. Here are the most notable fires over the last 130 years plus the history of the Villa Park Fire Department. 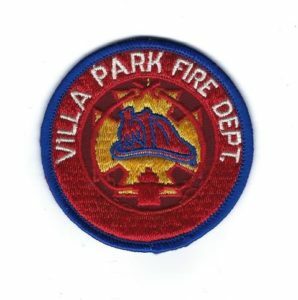 Canyon Fire 2 (October, 2017) – Villa Park narrowly escaped this fire when parts of Anaheim, Orange and Orange Park Acres were scorched. The fire started in Anaheim Hills and perhaps would have made it to Villa Park if the winds had not shifted southeast. The fires got as close as Santiago Creek near the border of Villa Park. Still it was a reminder to all that despite the amount of development that has occurred to the east, Villa Park is still susceptible to fires.

Sierra Fire (February, 2006) – Similar to Canyon Fire 2, Villa Park residents were very nervous with the black plume of smoke overhead. Residents of Anaheim Hills, Orange Park Acres and Orange (east of Cannon St.) were evacuated. The fire originated at Sierra Peak in the Cleveland National Forest (northeastern Orange County) but was held in check at the 241 tollway. The fire got close enough to put residents on alert and cancel Villa Park High School athletic events.

Gypsum Canyon Fire (October, 1982) – This fire burned nearly 18,000 acres and destroyed 14 homes in Villa Park, Orange and Anaheim Hills. Homes burned on the east side of Cannon Street (Loma St. at the time) in Crest de Ville before crossing Cannon. The Cerro Villa Heights area of Villa Park was evacuated and residents were watering their roofs in anticipation of a pending fire. No injuries were reported. Hall of Fame pitcher Bert Blyleven, who lived in Villa Park at the time, fell from his two story home and broke his non-throwing left arm.

Santiago Canyon Fire (December, 1974) – A brush fire whipped by winds gusting up to 50 miles an hour, blackened 123 acres, including parts of Villa Park, and forced evacuations. The fire was started by four juveniles playing with matches in a brushy area.

Villa Park Blaze/El Toro Fire (September, 1970) – 535 acres were burned and threatened homes in the Villa Park and El Toro areas. The fire in Villa Park started near the intersection of Cerro Villa Dr. and Valley Dr.  Home owners were soaking their roofs with garden hoses as firemen fought the blaze. The fire scorched more than 35 acres  up to Featherhill Drive but did not damage any homes. Arson of 15 to 20 small fires was suspected in both areas.

Paseo Grande Fire (October , 1967) – Villa Park ranchers and residents were roused in the dark to an evacuation on Halloween weekend, 1967. Many homeowners stayed behind to fight the fires and hose down roofs, but many fled to evacuation centers. Cerro Villa Heights, in the direct path of the roaring flames and without adequate fire fighting equipment and low water pressure, was one of the worst hit areas.

Fueled by a Santa Ana winds, 173 acres and at least 12 Villa Park homes burned down. over 47,000 acres and 66 homes burned down in Orange County. Nearly every Villa Park home had to be repainted in the interior. One houses lost in this fire was the former 14-room George Bixby home at the top of Loma St. from the turn of the century which also was the Fairway Country Club and Golf Course in the 1920s.

The Paseo Grande fire was so great that laws were passed regulating landscapes, vegetation and combustible roofing materials. The name of the fire came from where it started, at the end of Paseo Grande Ave. in Corona.

Foothill Fire (October, 1958) – A blaze broke out in the Santiago bed near Windes Drive and went into the foothills of Villa Park At least 500 acres were burned.

Green River Fire (November, 1948) – The week long fire started along Santa Ana Canyon with Santa Ana winds blowing at more than 50 miles an hour. It was one of the most devastating fires in Orange County history. More than 46,000 acres burned, and 22 homes were destroyed in Orange County.

Villa Park Elementary Fire (February, 1926) – Original Villa Park school buildings burned down in an overnight fire. A faulty chimney flue or defective wiring was the suspected of the fire.

Santiago Canyon Fire (1889) – Also known as the Great Fire of 1889 was possibly the largest fire in Orange County history burning at least 300,000 acres including parts of Villa Park. Santa Ana winds and a drought were considered the factors that led to a fire of this size.

The Villa Park Fire Department was established in 1959 and originally had 35 members from the local area including citrus growers, chicken ranchers, pilots and retirees. Fire station 23, at Santiago & Hewes, served the communities of Villa park, Orange Park Acres and El Modena and needed volunteers to man the equipment whenever the old siren on top of the station went off. All willing to respond to a fire horn or later beepers volunteered to put out local fires and respond to traffic accidents.

The California Division of Forestry, later California Department of Forestry (CDF),  provided all the training to the volunteers from Orange Park Acres and Villa Park. CDF taught the volunteers to be firemen, engineers (who drive fire engines and operate pumps) and Captains plus extensive medical training. Training sessions occurred on Wednesday evenings and volunteers got paid $2 per call.

A Villa Park tradition that arose from the volunteer fire department was Firehouse Pancake Breakfast.  The Villa Park Volunteer Firefighters first pancake breakfast was in 1962 and was used to raise funds for uniforms, training materials, etc.

By 1976 full time union firemen came in and gradually the newly formed Orange County Fire Authority shut down the volunteers fire fighters in 2006. One reason cited for shutting down the The Villa Park station was that in 2006 from January to June the volunteers responded to one of 59 calls.