California has suffered major devastation from power lines sparking wildfires during high wind conditions. As a resort, Southern California Edison (SCE) is shutting off the electricity to prevent fires caused by downed power lines and high winds during extreme Red Flag Warning periods (National Weather Service alert). Many recent fires are suspected to have been caused by power lines damaged during periods of high wind, including the Woolsey, Camp, Cascade, Thomas, Atlas, Nuns, and Partrick fires.

The issue for many residents is that there little to no notice or public outreach regarding when and where this will happen, leaving people without the opportunity to prepare. SCE will shut off electricity in high risk areas but the public does not know which areas SCE has identified as high risk. This can be an inconvenience at best and a safety concern at worst for residents. Other complaints have been that the power stayed shut off well after the winds had calmed down.

“We understand the impact [that] turning off power could have on customers,” Southern California Edison’s incident commander, Paul Grigaux, said in a statement on Edison’s website, Energized. “We will only shut off the power as a last resort when weather conditions are so dangerous that flying branches, palm fronds and other vegetation pose a threat to power lines and the safety of the community.”

Due to weather conditions that may create the potential for elevated fire risk, Southern California Edison (SCE) Public Safety Power Shutoffs can be under consideration in parts of SCE service territory. To find out if you are impacted, refer to SCE’s PSPS website. SCE customers can also sign up for outage alerts.

Act of Nature or Faulty Equipment?

While SCE positions the electrical shutdowns as fire prevention it also raises concerns that they may not be repairing deteriorating power poles and inadequately cleared brush and trees quickly enough. Utilities in the state face liability under what’s known as inverse condemnation as well as for negligence claims for wildfire and other damaging incidents caused by such things as power lines or other utility equipment. So while power shutdowns can be represented to the public as fire protection there is also self-preservation at play with the utilities.

How Do Power Lines Cause Wildfires?

Downed lines– Just like homes and office buildings, power distribution systems contain protective devices (e.g. fuses, circuit breakers) that detect short-circuit fault conditions and operate to limit damage to the system. These devices are intended to clear faults quickly, but in as many as 30% of cases in which a single energized line conductor breaks and falls to earth, surface contact resistance causes the resulting fault to draw too little electrical current to blow a fuse or trip a circuit breaker. Such a condition is known as a high-impedance fault, sometimes abbreviated as a HiZ (pronounced “high zee”) fault. A line with a HiZ fault can remain energized on or near the earth for an arbitrarily long period of time, often multiple tens of minutes, during which it produces high-energy, high-temperature arcing. The image below shows a downed-conductor, HiZ arcing fault on a 7,200-volt power line. It is common for a downed line conductor to remain energized and arcing until a customer calls the utility company to report a lights-out condition, which may occur only after several tens of minutes. An arcing downed conductor readily ignites proximate vegetation and other materials, particularly if it occurs in an area of elevated fire risk. Even if conventional protection finally operates, the period of arcing already may have started a fire.

Vegetation Contact – Trees and other vegetation intruding into power lines can cause fires in multiple ways. A tree falling across a line can tear the line down and result in a downed line. A branch spanning two line conductors for a sufficient period of time may ignite the branch and also may produce high-energy, high-temperature Jacob’s Ladder arcs multiple feet in length. If the branch remains in contact and arcing, it can cause progressive damage that eventually breaks the line. The picture below shows a tree branch that contacted a line intermittently, over a 24-hour period, and eventually burned the line down.

Repetitive Faults – Each power line fault creates some risk of fire. Most faults are isolated events (e.g. animal contact, etc.) that do not repeat. Some faults, however, will occur multiple times unless a utility takes corrective action. Repetitive faults can be caused by vegetation, conductor slap, or equipment that is in the process of failing, such as a cracked insulator.

Apparatus Failures – Many power line components (e.g., switches, insulators, transformers, …) provide trouble-free service for decades. A typical circuit may have hundreds or even thousands of components, making it impractical to inspect or test all components on a frequent basis. Components eventually fail. As they do, they often go through an pre-failure period, during which they continue to serve load until progressive deterioration causes complete failure. Pre-failures often involve arcing and sparking at levels too small to be detected by conventional technologies. Over time the arcing and sparking may increase in intensity and, under the right conditions, can ignite proximate combustibles. More commonly these pre-failures cause progressive damage that eventually evolves into high-energy arcing or even burns conductors in two, resulting an energized wire on the ground, which provides a ready source of ignition, as discussed above. 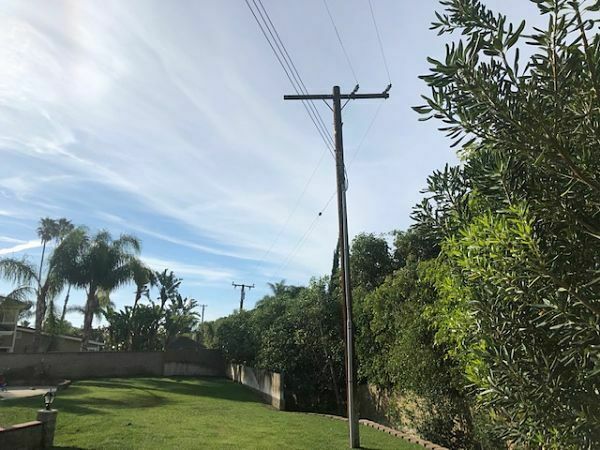