You are here: Home / Historic Sites Along Santiago Creek Trail

Orange County has an extensive history and some of that history can be viewed along the Santiago Creek Bike Trail (SBCT). Here are the points along to path to check out on your walk, bike or run along the trail. 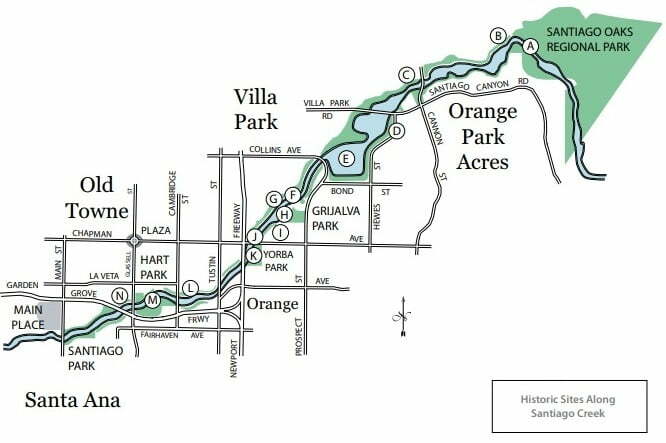 D. Grijalva Adobe at Hoyt Hill, (east of the intersection of Hewes and Rancho Santiago Blvd., probably built shortly after 1800. The existing Victorian-era home was built on this site in 1887. A remnant of a rock wall foundation is all that remains of the Grijalva Adobe.

E. Conrock and Blue Diamond (or Bond) Pits: the legacy sand and gravel mining and consequences for the creek, 1900-1980; adaptation as water recharge basins by Orange County Water District, 1990s.

I. Town site of McPherson, 1886; grapes were the primary local crop.

J. Orange, McPherson & Modena Street Railway, crossing at Chapman Avenue first constructed for horse-drawn streetcar during the “boom” days of the 1880s (destroyed by flood in 1891).

M. William O. Hart Park, once known as Orange City Park, the first municipal park. Hart was editor of the Orange City News. Rockwalls built in creek by WPA. Park was home to the Lionettes, a women’s softball team.