You are here: Home / Community Updates / Aftermath of Fascenelli Lawsuit Continues to Reverberate 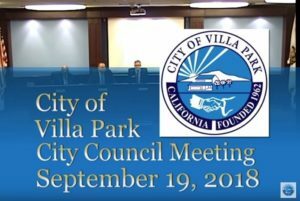 Diana Fascenelli’s failed petition against the City of Villa Park, to remove Mayor Collacott from the upcoming election, continued to be felt at the latest City Council meeting. Villa Park resident, Janice Bjorklund, led off the night with a statement that she was “…delighted to hear during the month that the court has denied that writ and that we are now all going to be free to vote for whoever we want to vote for.”

“The disappointment that I have in the city and in this election process is overwhelming,” said Diana Fascenelli. “It’s a shame that we have people on the council, people who want to run for council, who cannot follow the rules like everyone else,” declared Fascenelli, despite an Orange County Superior Court ruling that denied her claims.

“On August 10, 2018, I filed my papers as a candidate for the Villa Park City Council.  My candidacy papers were filed lawfully, in close consultation with the City Clerk, and before the 5:00 pm close of business filing.  Note that candidacy papers are relatively simple – name, address, telephone number, candidate signature and at least 20 valid nominating signatures (I had 30).  Candidacy papers are not complex legal documents. On August 14, 2018, the City Clerk notified me that I met all requirements and was formally qualified as a candidate for the November 6, 2018 Villa Park City Council election.  The City Clerk verified that everything in my filing papers was in order.

Nevertheless, on August 20, 2018, the Fascenellis filed a lawsuit against our City and the Orange County Registrar of Voters seeking to remove my name from the November ballot.  On August 27, 2018, a preliminary hearing was held at the North County Superior Court in Fullerton before Judge Craig Griffin to exchange documents.  The Fascenellis insisted on a full trial with examination of witnesses, rather than an exchange of written arguments, and set a date for hearing.  The County Counsel attorney noted that, in over 20 years of representing the Registrar of Voters, this was the first actual trial on an election matter, usually these are handled through written pleadings and declarations only.

On September 4, 2018, a hearing on the Fascenelli lawsuit against the City was held at the North Justice Center Superior Court in Fullerton before Judge Craig Griffin.  The hearing lasted approximately three hours, virtually all of which consisted of the Fascenellis attempting to make their case.  I had the pleasure of being on the stand for over an hour. It is noteworthy that Tina Richards, Editor of The Sentry, and Andie Mills, reporter for the Sentry, chose to sit with Mrs. Fascenelli for the entire hearing. In the most recent edition of The Foothill Sentry with Andie’s article headlined “Lawsuit Rocks Villa Park Election” and was subsequently published prior to the issuance of the Court’s ruling.

On September 7, 2018, Superior Court Judge Craig Griffin issued an 11-page ruling denying the Fascenelli complaint in its entirety.  In his ruling, Judge Griffin, found absolutely no evidence for any issue raised by the Fascenellis.  In summary, the Court found the entire lawsuit against the City attempting to remove my name from the ballot without merit.  Judge Griffin found absolutely no wrongdoing on the part of City staff.  The bottom line is that the voters will have a choice in November and my name will remain on the ballot as a candidate for re-election to Villa Park City Council.

Fred Fascenelli passed the bar and has been a practicing attorney in Orange County for some time.  It is unlikely that he would have filed a meritless lawsuit against the City – especially in a Court in which he is routinely heard – unless he had a hidden objective.  Remember, Andie Mills and Tina Richards are good friends with the Fascenellis.  Could it be that the lawsuit against the City was just a sham for a campaign hit piece against my candidacy for her friends to post on the front page of The Foothill Sentry?  It will be interesting to see where the Sentry places their article on the Court’s denial of the Fascenelli lawsuit against the City.  After the City Council meeting Tina Richards was quoted as saying that her response to this issue will be on page 20!

At this time the City Manager and the City Attorney have not been able to provide an estimate of the cost to defend against the lawsuit filed against our City. Given the City Attorney’s billing rate, the amount of time needed by the City Attorney and City staff to review and respond to the lawsuit, communications, and attendance at the hearings, a fair estimate is $20,000 – or roughly $100 per household in Villa Park – for a political scam not benefiting the City but only serving political objectives damaging to my candidacy and to promote Fascenellis re-election.

The ability to file a lawsuit is a fundamental right, but this right comes with responsibilities.  An important responsibility is to not misuse the legal process. In many cases defendants are provided the opportunity to recover costs associated with frivolous lawsuits.  However, cost recovery is not allowed for frivolous lawsuits involving elections, so our City will be left holding the bag for this scam in an attempt to dupe our residents and damage my candidacy.  Beyond the financial costs, the Fascenelli’s lawsuit against our City only serves to damage our reputation as a small, friendly and congenial residential city.  I intend to discuss this misuse of process fully with the Bar following the election.

Copies of Judge Craig Griffin’s ruling, as well as the Fascenelli lawsuit against the City, the responsive brief filed by the City Attorney, and the responsive declaration filed by the Registrar of Voters and other documents are available for review at City Hall.  The ruling and many other documents, as well as a review of the issue is also available on the www.villapark.co web site.  Residents are encouraged to review these documents.” ~ Robert Collacott

28:20 – Public Comment from a Villa Park resident speaking against the Fascenelli lawsuit.