The Villa Park City Council voted 3-2  to ban short term rentals (less than 30 days) at the  City Council meeting on July 24th, 2018. The ordinance shall become effective 30 days from the date passed. Voting for the ban were Vince Rossini, Robert Collacot and Robbie Pitts with Diana Fascenelli and Bill Nelson voting against.

At the meeting on July 24th three people spoke against the ban that all had commercial interests in having STRs. These people included:

One long time Villa Park resident who spoke advocated that Villa Park is a community of stable, single family homes that wants a safe, family friendly environment which STRs do not represent. Additionally, more residents contacted the Villa Park City Hall to express their support for the ban.

“If we have issues, let’s address them, but let’s not make laws and ordinances to restrict property rights.  We took away rental rights last month, and now we’re taking this away” said Diana Fascenelli. This position comes off a previous decision where she voted against a permit to allow a homeowner to operate a family day care.

It was noted by Councilman Nelson that at least one STR owner has threatened litigation against the city if this is passed. Currently the City of Villa Park is aware of at least 8 known STR’s within the city limits of Villa Park.

Short-term rentals (STRs) are houses for rent in Villa Park right now. Short-term rentals, which are typically considered rentals of a residential property for a period of time less than 30 consecutive days, are currently NOT prohibited within Villa Park’s residential zoning districts. In fact, Villa Park is silent on STRs and there is no policy even governing STRs. This means that in Villa Park STRs do not need to register, apply for a business license nor pay any city taxes, they’re unregulated. Many other cities, including Anaheim, have enacted STR policies restricting short term rentals. 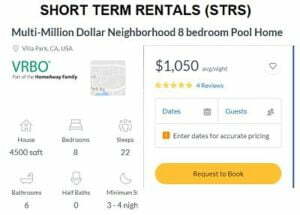 A quick search on VRBO STRs in Villa Park shows at least one home renting for over a $1,000/night on a regular basis. The property owners of this house are investors and do not live in the house. It is available for rent year round for up to 22 people a night.

What Can You Do?

Contact the Villa Park City Council and urge them to prohibit STRs and enact policies that protect Villa Park residents. Residents are also encouraged to attend the July 24, 2018 meeting to voice your concerns.

VP’s ADU law from 2005 was updated in April 2018 to require residents who have an auxiliary unit separate from their primary house to be required to live in one of them if the one of the dwellings is a rental. The rental also must be offered for a minimum 30-day period meaning non short term rentals. Homeowners with just one house on their property are NOT required to live there, and can freely rent it out for any period of time.